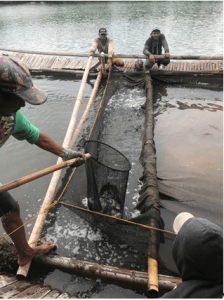 The Roxas City Aquaculture Association (RACA), Province of Capiz, lauded the livelihood support initiative of the Institute of Aquaculture, College of Fisheries and Ocean Sciences (CFOS-IA), UP Visayas (UPV).

Mr. Manuelito Batay, chairman of the fish farmer association said in an interview that the Advancing Barangay Aquaculture for the Nation and the Economy (ABANTE) project of CFOS-IA helped boost their income. Batay was interviewed by Ms. Ramie Lyn G. Bañares of the Office of Provincial Agriculture of Capiz during the latter’s on site fish monitoring last month.

Batay, a fish cage operator from Brgy. Cagay, Roxas City, Capiz, said in a local dialect that the project was very useful to provide additional income for the needs of his family.

This was echoed by Mr. Pastor Aguilos, member and secretary of RACA.  Aguilos expressed his gratitude to CFOS-IA for the free tilapia fingerlings and feeds.

Batay and Aguilos were two of the three pilot beneficiaries of the ABANTE program in the province. They received 2,860 UPV saline tilapia fingerlings on November and December of last year.

The UPV developed saline tilapia strains can tolerate and grow in seawater of 35 parts per thousand (ppt) and higher salinities compared to the regular tilapia, which can only survive at salinity level of 10 to 15 ppt.

The fish cage co-operators praised the quality of the fingerlings, which according to them, have 50% survival rate and were fast growing.  They said they were able to harvest and sell their produce at a competitive market price after three months.  The average weight of each fish was about 200-250 grams.

The farmer-beneficiaries wished that a tilapia hatchery for saline tolerant tilapia strains will be put up in their province to answer their needs for tilapia fingerlings.

The RACA cooperative has been actively involved in aquaculture activities in the riverine and estuarine ecosystems of Capiz. These aquaculture areas were previously not suited for the growing of tilapia but with the introduction of the UPV saline tolerant strain of tilapia, these aquaculture sites are now able to support and produce tilapia, said Prof. Rex Ferdinand M. Traifalgar, director of CFOS-IA.

Traifalgar led the implementation of the project together with Mr. Fredson Huervana, Prof. Carmelo del Castillo, and Mr. Alan Failaman.

The director added that aquaculture of saline tolerant tilapia offers additional livelihood for communities located in riverine and estuarine ecosystems. Aquaculture of saline could contribute to the national goal of increasing food fish production to attain food security.

The RACA group is also hoping for the sustainability and expansion of the project to benefit more farmers in Capiz.

ABANTE is one of the public service initiatives of CFOS-IA specifically geared towards the advancement of skills in aquaculture and to provide an alternative means of livelihood among the aquaculturist beneficiaries. The project is in partnership with the local government units.

Records from CFOS-IA revealed that since its inception in 2020, ABANTE livelihood program benefited 15 farmers in the region particularly in the province of Capiz, Iloilo, and Aklan.

As of this writing, an estimated 29,435 fingerlings (5,200 for catfish and 24,235 for tilapia) were distributed to farmer beneficiaries.  The recipients were identified through the assistance of the Municipal or Provincial Agriculture’s Office. (With sources from CFOS-IA and OPA-CAPIZ)

(This article, written by Lenilyn Gallos, was first published in the UP Los Baños Website on August 1, 2022)