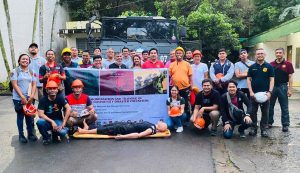 The Security and Safety Office (SSO), formerly the University Police Force, under the Office of the Vice Chancellor for Community Affairs, conducted a 7-day capacity building program on basic disaster risk reduction management for representatives of various offices in the university.

The course focused on high-threat emergency care, mass casualty incident response, and earthquake landslide search and rescue orientation and was held from 8 am to 4 pm on Dec. 6-14.

Through this activity, SSO aims to organize a team of UPLB community disaster volunteers and capacitate them in the basics of disaster and emergency response, especially during typhoons, floods, earthquakes, and landslides, including but not limited to search and rescue operations as well as emergency casualty care.

Since the activity was designed to collaborate between UPLB SSO and barangay responders where the campus is situated, it also included participants from the two nearby barangays of Batong Malake and Tuntungin Putho.

In the event of a large-scale disaster, the Office of the Chancellor may mobilize the individuals who participated in the training to augment disaster response and rescue operations inside the campus based on the provision under Rule 9 of the implementing rules and regulations of Republic Act 10121 or the guidelines for the mobilization of accredited community disaster volunteers.

According to Vice Chancellor for Community Affairs Roberto Cereno, the participants will become disaster-ready individuals empowered to act as community volunteers during disasters.

The activity concluded with a remark from the director of SSO, Dr. Mark Dondi Arboleda, who congratulated all participants and commended them for a job well done.

(This article, written by Jonathan Maliwat, was first published in the UP Los Baños Website on December 20, 2022)