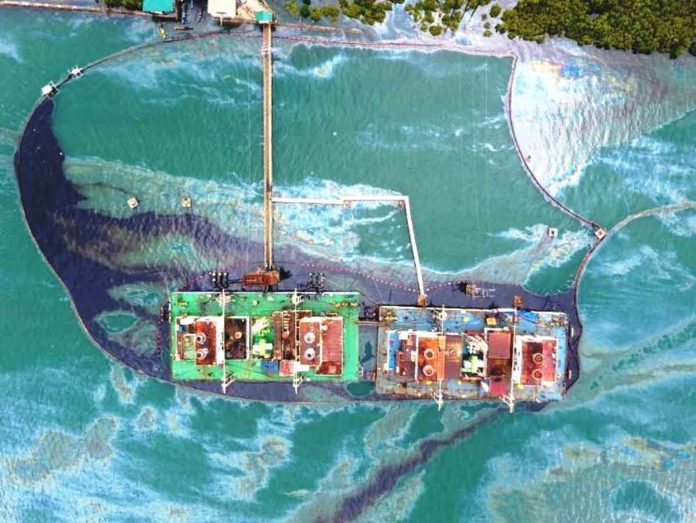 This drone shot shows the oil spill that resulted from the July 3, 2020 explosion of a power barge in Iloilo City.

GUIMARAS – Over a year after the Power Barge 102 (PB 102) oil spill that occurred on July 3, 2020, the University of the Philippines Visayas (UPV) and UP Visayas Foundation, Inc. will be assessing and monitoring the incident’s environmental damage.

The oil spill affected the mangroves along with the coastal areas of Iloilo and Guimaras provinces.

Areas to be assessed will be grouped into three – heavily oiled, moderately oiled and the control sites.

The following are the selected monitoring sites:

The oil spill was a result of an explosion triggered by hot works on the barge.

In the damage assessment report by the Department of Environment and Natural Resources, a total of 43 barangays (17 in Iloilo and 26 in Guimaras) were affected.

A total of 259.24 cubic meters of bunker C oil was recovered.

No clean-up has been conducted in mangroves stands to prevent further damage.

At the same time, clean-ups in other types of habitats were done in coordination with their respective local government units, following the internationally recognized Shoreline Clean up and Assessment Technique (SCAT).

To date, no massive mortality of trees has been observed. Nevertheless, areas where oil is still considered to be in the environment are included in the study that needs further monitoring. These would consist of monitoring mangroves, sediments, and benthic communities (particularly shellfishes, where gleaning for food is taking place).

The monitoring team will be spearheaded by Dr. Resurreccion Sadaba, the program manager and project leader for the biological assessment.

His team will be composed of the following:

The research program will include the following:

(a) identification of mangrove species

(b) assessment of the community structure

(c) assessment of the recruitment and mortality rate, growth dynamics, and period of recruitment

(f) analysis and determination of the levels of polyaromatic hydrocarbons (PAH) and total petroleum hydrocarbons (TPH) in sediments and shellfishes.

(This article was first published in the Panay News on September 23, 2021.)